The pilot phase of “Best Friends” in France 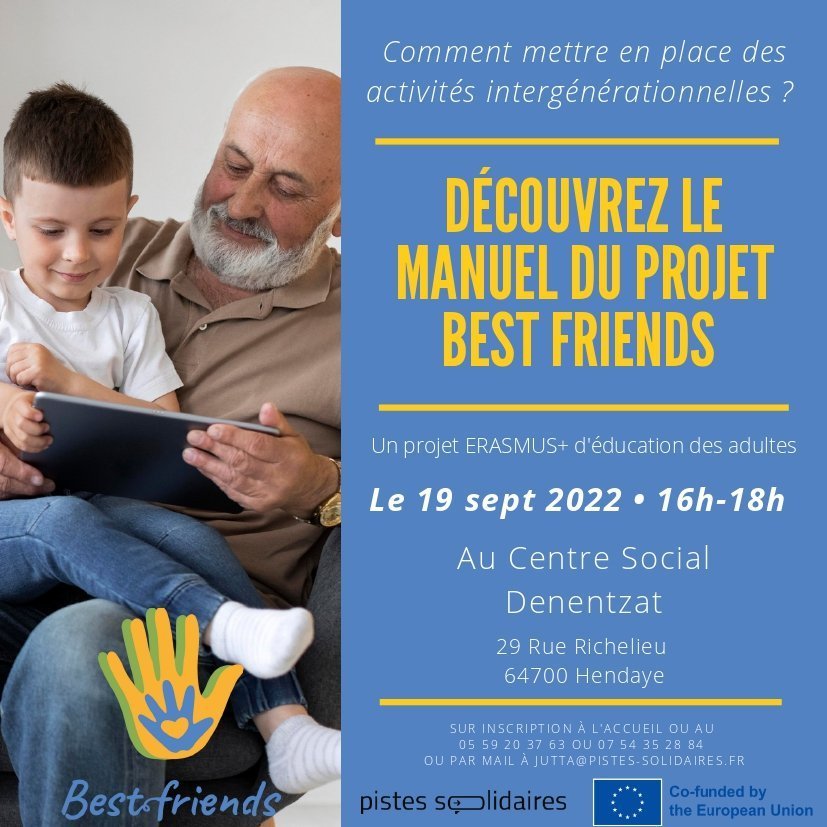 In France, the testing phase of the training manual and toolkit took place in September and October 2022. The workshops sessions to test the BEST FRIENDS manual were organised the 19th of September at the social centre Denentzat in Hendaye, very active in working with elderly people and with children, and the following day in Pau, in the office of Pistes Solidaires with a group of community workers. Both workshops were attended by professionals who were already familiar with some of the theoretical chapters through their work experience, but who were very interested in the learning activities and examples of good practice across Europe. The lively discussions and the exchange of experiences showed that the topic is of great interest.

The pilot test of the toolkit took place the 25th of October in cooperation with the Elgarrekin Leisure Centre and the Harriola retirement home in St. Pierre d’Irube. Two games were on the programme: What’s in the bag? and designing a postcard in groups of two. Six children aged 5 and seven seniors were accompanied by two caregivers from the retirement home and an educator from Elgarrekin for this workshop. The first game, What’s in the Bag, was played with everyone present in a circle, alternating between a child and an older person. This game took some time, as it was a challenge for both the children and the elderly to recognise and name the unknown objects by simply feeling them with their hands. On the other hand, this contributed to a good atmosphere, because everyone had the same difficulties and when an object was correctly recognised by a child or an elderly person, the others applauded enthusiastically.

The second game, played in 6 pairs, was a creative activity that focused on cooperation between children and elders. It worked perfectly because they complemented each other. They chose the pictures for their postcard together, then the children cut out the pictures and the seniors glued them on or helped them cut them out. They also helped the children to determine the arrangement of the cut-out pictures on the A5 cardboard, which was a bit difficult for the children because the dimensions were very different. But there were no limits to their creativity. The aim was to choose the pictures that they liked best in terms of destinations or leisure activities that they would like to visit and do. In other words, it was a very personal choice and therefore an ideal activity to bring the two generations closer together. All participants enjoyed the activity very much and there were many conversations. Especially the seniors had a lot of sympathy for the children and were impressed by their dedication and fine motor skills. Also in this game, the two generations were at a similar level in terms of skills, which makes it a perfect intergenerational game.

The feedback of the participants was very positive. The older ones stated that they hardly meet any more children and would like to do this kind of workshop regularly. The careworkers of Harriola were also very satisfied with the workshop. They wish from now on a permanent partnership with the leisure center Elgarrekin to be able to organise these workshops regularly and appreciate the BEST FRIENDS toolkit for other games.